How the Soup Kitchen operates 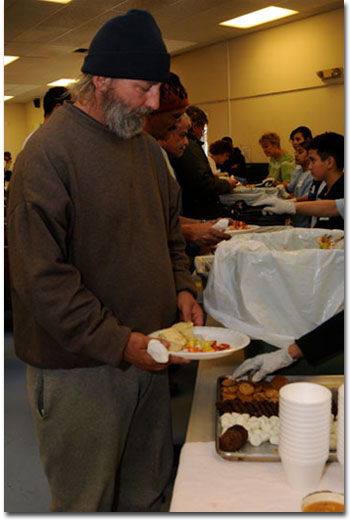 The Denver Catholic Worker Soup Kitchen serves meals Wednesdays (except the third Wednesday of the month) and Fridays. We prepare the meals at Denver Inner City Parish, 1212 Mariposa, from 9:00 am to Noon. Then we serve the food at  Colorado’s largest day homeless shelter, St. Francis Center, 2323 Curtis Street, Denver. We begin serving the meals at 3:00 p.m. We have volunteers of all ages, from young adults to retirees, and religious backgrounds. Volunteers give their time for every phase of our operation: food donation pick-up, food purchase, cooking, transportation, serving meals, and clean up.

We have been providing meals in Denver for 30 years. Ours is an all-volunteer operation. Volunteers gather food donations, shop for food, prepare and serve meals, provide administrative services, and serve on our Board. During the winter months, the number of people seeking meals increases significantly. As a reflection of the economic times, these include a number of individuals who are homeless for the first time. During the winter of 2008-2009, we served the highest number ever in our history.

The story of the Denver Catholic Worker Soup Kitchen reads like the life of the homeless we are dedicated to serve. The Catholic Worker Soup Kitchen began its journey in a church on the west side of Denver in 1979. We shared a space there for a short time with another group before relocating to Agape Church on 25th and California. A good location and welcoming church community made this an especially nice location for a while, but it too did not last. When a former plumbing company building on Welton Street, two doors from the Catholic Worker Hospitality House, became available, the Soup Kitchen relocated there in 1980. That became the Soup Kitchen’s home for the next 19 years until the property was razed for redevelopment.

The Soup Kitchen was on the move again. In the Fall of 1999, the Denver Catholic Worker Soup Kitchen moved into the old Central Catholic High School at 1840 Logan St. Although this was just a few blocks from its previous Welton Street location, the change of location brought a change in the guests at the Soup Kitchen. It was an ideal setting for the Catholic Worker Soup Kitchen’s mission of preparing and serving meals and offering hospitality. It also became a place of disappointment and frustration as neighborhood pressure forced us to move.

For the next two years, the Denver Catholic Worker Soup Kitchen was itself homeless on the streets of Denver and unable to find, rent, buy or build within the area. In 2001 we began a dialogue with St. Francis Center at 2323 Curtis Street, a day shelter already established within the area, about our serving an evening meal at the Center. They were very interested and supportive, and a mutually supportive and regenerative relationship developed. Unfortunately, St. Francis Center has no kitchen facilities to prepare the meal. This led us to discover the community of St. Paul Methodist Church at 1615 Ogden St in 2001. This church was already engaged in many other outreach programs and offered us their kitchen to prepare our meals and then transport them to St. Francis Center to serve them. Our latest move has been to Denver Inner City Parish, 1212 Mariposa Street, where we assemble and prepare our meals.

The Denver Catholic Worker Soup Kitchen Community has always been a wonderful commingling of people of different social, economic, educational, political and religious perspectives. The Denver Catholic Worker Soup Kitchen has embodied this commingling in an extraordinary experience in ecumenical and interreligious dialogue and collaboration around a shared mission.

Or email us at: bpiyer28@yahoo.com

Let us know what information you need. Include a telephone number if you want us to give you a personal call.